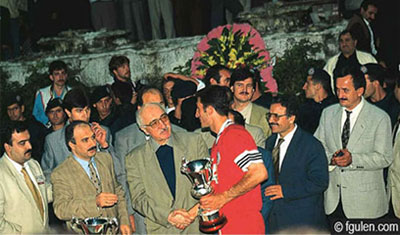 It is a fact that the concepts of democracy, peace, dialogue, and tolerance have spread and are now being taken seriously with the expansion of communication networks throughout the world. In order for these concepts to become more widespread and for everyone to benefit from them, a number of responsibilities fall on all people, both as individuals and as societies.

In connection with this matter, one important source of power and means of communication that can influence society is without a doubt sports. All manner of sports programs, indeed, anything that pertains to sports, are instantly transmitted from one side of the globe to the other. Of course, there are other, more conventional ways to spread ideas, but by employing this means we can help the ideas of dialogue and tolerance spread; ideas that we believe to be so essential that they must be made known to everyone can be publicized by this means for the sake of the wellbeing of both our own people and all of humanity.

For example, the 90 minutes spent on the field during a football match could be well utilized. The game itself will give pleasure to the spectators in the stands and, at the same time, without any objections, a number of human virtues could be easily displayed. It is important to utilize this 90 minutes in this way. For example, as was formerly done in sports matches, the victors and the defeated would come together, embrace, shake hands and radiate sportsmanship to all around them. Such behavior would in time be reflected by the behavior of the people in the stands. This would be an important lesson to the people who occasionally feel inclined to burn their seats, curse one another, or even attack one another with weapons; for them it would be highly beneficial to see and show the sports profession in a light that radiates good feelings and thoughts. Even if the spectators of today do not respect the fact that the players are shaking hands before leaving the stadium, in time the behavior of the players will break the cycle of hate and vengefulness, or at least, neutralize it. At this time, this is what the world desperately needs.

Both internally and externally certain people have a desire for conflict and have been brought up in an environment of conflict, and therefore they do not desire dialogue or the improvement of human relationships. It is for this reason that we must act very cautiously. In every task undertaken, there should be a certain meaning, sincerity should be sought, and reason and good judgment should be the priority. In addition, every profession should be given its due and it should behave accordingly. An imam uses his voice in the mosque, but a film star, an actor, or an author does not act in the same way. The actor gives precedence to body language or acting ability and the author to writing style and the writing of ideas in a literary way. This is how it should be; otherwise, the impact of the message and its effect is diminished and the message is of no benefit. The same thing is true for sports. An athlete should demonstrate his or her abilities through success, good behavior, and an exemplary lifestyle.

Unfortunately, today the importance of some values has not been perceived. People have a greater need for religion than they do for bread and water, for the peace and security provided by religion, and for the guarantee of an afterlife; I believe that when these facts have been properly explained, then there will be no doubting this matter. There are many people throughout the world who want to do something in the name of Islam. But when this important subject is approached in a crude manner, hate is evoked in the place of love, and unbridgeable abysses appear between people. Yet, what is expected and needed is for Islam to be a bridge and a road between people, as well as a factor that breaches the abysses.

If we do not respond to those who are extending their hands in order to express their love and respect, we will become unlovable. In fact, we will cause some undesirable negative developments to occur. In short, we can say that as an important factor in realizing social dialogue and tolerance, sports can also be utilized, if done so in a wellthought out manner.