Turkish Islamic scholar Fethullah Gülen, who resides in Pennsylvania, placed ads in leading US newspapers on Wednesday to condemn the atrocities of the terrorist Islamic State of Iraq and the Levant (ISIL).

In the ads, which appeared in The New York Times, The Washington Post, The Wall Street Journal, the Chicago Tribune and the Los Angeles Times, Gülen said the actions of ISIL -- referred to in the ad as ISIS, another name it goes by -- are a "disgrace to the faith they proclaim and crimes against humanity."

The ads were paid for by the Alliance for Shared Values (AFSV), which issued the same statement on its website on Aug. 22. The AFSV is a non-profit organization that serves as a central resource for information on Gülen and his faith-based Hizmet movement.

The top of the ad reads "ISIS Cruelty Deserves Our Strongest Condemnation." Stating that religion provides a foundation upon which to establish peace, human rights, freedoms and the rule of law, Gülen emphasized that "any interpretations to the contrary, including the abuse of religion to fuel conflicts, are simply wrong and deceitful."

Referring to other terrorist organizations that claim the name of Islam, Gülen said ISIL is not the first group to "use religious rhetoric to mask its cruelty" and mentioned al-Qaeda and Boko Haram, which have in common "a totalitarian mentality that denies human beings their dignity."

Gülen, who is known for inspiring the grass-roots Hizmet movement with his peaceful teachings, reiterated the incompatibility of Islam and violence. "Any form of violence against innocent civilians or persecution of minorities contradicts the principles of the Quran and the tradition of our Prophet (peace be upon him)," his message stated.

According to Gülen, ISIL members are either completely ignorant about the faith they proclaim or their actions are designed to serve individual interests or those of their political masters.

Extending his condolences to the families of victims of ISIL terrorism, Gülen mentioned names such as James Foley, Steven Sotloff and David Haines, who were brutally murdered by ISIL recently. "May God give them strength, patience and perseverance, and [may he] alleviate their suffering," Gülen prayed on behalf of their families. He also prayed for the immediate and safe release of Turkish hostages being held by ISIL as he urged everyone to join him in prayers to lead us all toward mutual respect and peace. 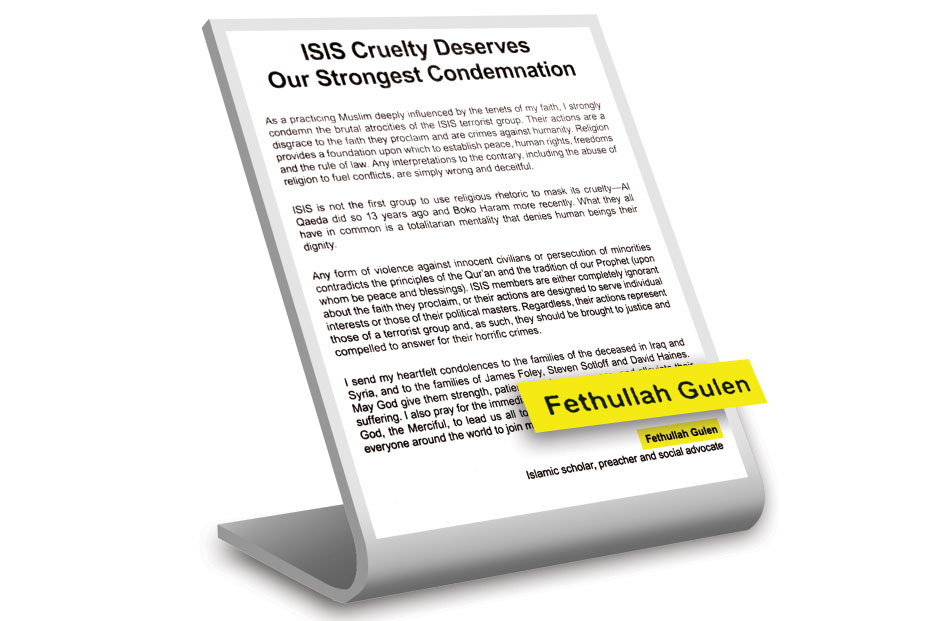