Osama Bin Laden's Terror on the One Side, with Gülen's Love, Dialogue, and Understanding on the Other?

How can two rhetoric that are completely opposing arise from Islam; Osama Bin Laden's terror on the one side, with Gülen's love, dialogue, and understanding on the other? The religion appears to be the foundation for both. 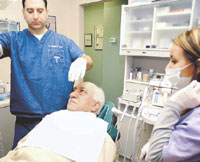 Bin Laden comes from a large family, I think, with almost 30 brothers and sisters. They are also financially powerful, enough so that they can loan money to the State. When I went for hajj, I met someone from that family, a devout person. He told me that his family had rejected Osama, who was being used by the US against the Russians and had been banned from entering Saudi Arabia, it was being said then.

What year was that?

I think it was 1974. He attracted attention then because he was being used against the Russians, but I was never attracted to him. You already know what followed. Whenever the name "Bin Laden" is mentioned, "the father of terror" comes to mind. The image that he has formed with his beard, turban, and a weapon in hand, as he appears on videos which are revealed every now and then, seems to be being shown in order to instigate hatred against Muslims.

Perhaps, we should also add that Bin Laden may not be alone in his ideas; there may be some other people who agree with his views. Looking from one angle—it is not proper to say it in this way, but—it is also possible to consider that these few monsters who have come out of a Muslim world of 1.5 billion are like the waste matter of the Islamic establishment. With their reprehensible manners, they are darkening the bright face of Islam, aggravating conditions for those who would like to tell others about Islam, and narrowing their field of activity. This terror has become a great burden on the back of everyone; if we had expended the same effort that is needed to free ourselves of this burden, it would have been possible to win the hearts of many by telling them about the beauties of Islam. Today, when Muslims want to introduce themselves, they must first start by convincing others that they are not terrorists, that they do not behave radically, or that they are not a live bomb.

How is it possible for the same sources to give rise to two such opposing views?

Bin Laden can argue as much as he wants that he acts upon the Qur'an and the Sunnah. If God Almighty would accept me as one of the small individuals among Muslims, I can also say that we have based ourselves upon Islamic scholars and that an overwhelming majority of philosophers, sociologists, and those who know Islam have come out from among the Muslims and all of us are allied in the way we think.

If the experience of our Prophet and the four Caliphs are to be taken as the basis for Islam, then the actions of Bin Laden cannot be justified. There is no way that the Prophet's work can be seen as being in line with what Bin Laden does. When the Prophet's battles are analyzed from a philosophical perspective, it can be seen that he defended his treaties by using his legitimate rights against those who were pulling him into certain schemes.

At other times he took action in order to punish those who had betrayed his system or treaty; this is quite normal, and the conquest of Makka was realized after such a betrayal. Such actions are also taken today in modern democracies and the United Nations remains silent about them. For instance, if some claim that they have entered Iraq in order to bring in democracy then they are not able to criticize the Prophet's actions.

What is Bin Laden's perspective?

Taking the Prophet's actions as essentials, it is understood that Bin Laden cannot cast a comprehensive look onto the matter. He is taking as reference only some sections; he does not explore in general terms the Qur'an, the Sunnah, and the understanding of the salaf-i salihin (prominent guides among the Companions and their followers). There is one example for this which is frequently cited: the Muslim army came to the walls of Byzantium, and the Muslim soldiers had to defend themselves against rocks and arrows, as well as the burning oil that was poured from the walls over their heads. Some were heard to cry out the Qur'anic verse, "Do not throw yourselves into danger with your own hands."

Abu Ayyub Al-Ansari (Halid ibn Zayd) at that moment intervened: "You have misunderstood (the verse). This verse was revealed to warn us. It means to say that 'Forsake your property and your lives for the sake of God. You will have thrown yourselves into danger if you do not forsake them when the time comes.'" He corrected the misinterpretation. "You will throw an entire nation into danger if you do not forsake your lives in the Dardanelles, in the War of Independence (ie. the War of Independence of Turkish people)"; this is what it means.

Similarly, the section in the Qur'an that states, "kill polytheists wherever you see them" is taken literally and out of context (by Osama and others like him) without looking at what precedes or what follows this verse. Such an understanding brings about misinterpretations. This verse means "to punish those who have accepted you and become part of you, and who have then rebelled and betrayed the nation in hostility." Every State protects itself from such treachery, and punishes the traitors. This verse is followed by, "if they return, say their daily prayers, fast during Ramadan, and find their original paths, release them." The interpretations of Bin Laden and others like him come out if the arguments are based upon one single word that is taken out of context.

Do you think this is a methodology problem?

Yes. Their approach is one-sided. When we talk about Muslims, if we do not look at the Pride of Humanity (Prophet Muhammad), the Qur'an, and the Sunnah, then our crude and harsh manners are screening them and darkening their appearance, and we are not doing good, but evil. It is not known today whether Bin Laden is alive or not. I hope that he is dead, so that Muslims can be saved from such a distorted mentality.

What would you say about the kidnappings and beheadings in Iraq? What is the religion's stand toward these events, which are said to be carried out for the sake of Islam?

First of all, the jurisprudence categorizes the men that have been kidnapped (in Iraq) not as captives, but as hostages and most of them have been killed. If such actions are being committed by the Muslims there, it is nothing less than murder, hidden under the name of Islam.

"No one can be punished for another's crime," is an important commandment of the Qur'an. If these murders are a reaction to an invading power, then what they should have done was to start a heroic war of independence.

They should have mobilized their armies, divisions, and army corps, about which they had exaggeratedly boasted, when the US entered. They should have taken the risk even to be destroyed, as the Turkish nation once did in the Dardanelles and in the Balkans. Maybe half of them would have died, as the Turkish soldiers died in the Dardanelles, but at least the survivors would have represented a free country. It is not acceptable now to capture and kill innocent people in order to draw the Americans away; what they should have done was to fight when it was time to.

It is impossible to accomplish anything in this way. However, there is another aspect of the matter; if these murders have been perpetrated by some (intelligence) organizations, then this is being done to increase friction; for instance they may want to push away Turkish businessmen (out of the region) (translator's note: Many Turkish businessmen and truck drivers have been kidnapped recently in Iraq).

The violent attack on the guards sent to guard the embassy is not something that can be forgiven. It is obvious that some sources are willing to cause chaos. I don't believe for a moment that a Muslim who believes in God could have done all these. Such a person must have gone insane.