Should the State Be an Objective for a Muslim?

What would you say about what you have said on the cassettes? 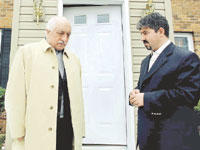 What I have said on those cassettes has been cut and pasted to create a different form; they were put on the screen after deletions and additions were made to my words and I appear to say things that I never intended. For instance, I say in one of those cassettes, "You cannot say 'God's curse be on CHP (the Republican Party).'" They deleted the first part "you cannot say...", only showing the second bit.

Some of the words and terms I used were either misinterpreted or deliberately distorted. For instance, I talked about, "selling mamelek", which was mentioned in the media as "selling memleket (memleket: one's homeland)." Mamelek means one's personal property. All claims and accusations were based upon such distortions.

Moreover, unfortunately (then), there was a corrupt establishment in Turkey—even though it was only partial—which has been acknowledged by everyone and has been brought into the light over the last few years. There were people whose interests, promotions, and futures lay in the continuation of this corrupt system. Those who committed wickedness, such as bribery, did not want to have those who refused to partake in bribery, seeing it as a sin, next to them. They could not tolerate having honest, just, religious directors and officers who had good morals in certain positions. (In the face of all this) if I had wanted to have honest officers in government offices, this should have been interpreted as my duty, not just a civil right, and my words should have been welcomed from this perspective, not with prejudice (Translator's note: in some of the cassettes released in the media in 1999, Fethullah Gülen advised his audience to keep their positions in government offices, as honest and just officers. These words were distorted to infer that Gülen was managing a secret organization to take over the State).

The theory that the State is the ultimate aim of religion has been repeatedly discussed, and as it still is. In the beginning of the '90s you said that 95% of the Islamic commandments are related to the individual, with only the remaining being related to the State. What does this 5% entail if the religion is to be lived perfectly? Should the State be an objective for a Muslim?

That saying (of 95%) belongs to Bediuzzaman. I also think that people can live 95%, or maybe 97%, of their religion without causing any worry, providing that the framework drawn by democracy is maintained and the fields of activity have not been narrowed by such things as "public domain." When it comes to the remaining 3-5%, some say, "Religion is a matter of conscience"; this is something with which I cannot agree.

Religion is not just comprised only of matters related with the conscience, for religion assumes a role at certain times in social life, as well as in administration. However, these issues have diverse characteristics and historical aspects. For instance, there is no particular model for either the method of election or the system of administration. When we look into the historical development of the Islamic system of government, Abu Bakr was elected by the public; but Umar was elected after he was nominated by Abu Bakr. Uthman was elected after Umar indicated the group of ashara al-mubashshara (ten persons who had been given glad-tidings for Paradise), one of which was Uthman. There was some opposition to Ali's election, and another administration was formed in Damascus with an opportunity being born for Muawiya. During the Umayyad reign, rule began to be passed down from father to son, a practice which continued with the Ottomans. All this shows that the religion has certain commandments with a definite methodology; these have never been touched. Outside of this is a territory of relative truths that are open to interpretation (ijtihad) and judgmental inference (istinbat), so that the conditions and needs of the time should be duly evaluated.

Why do you think the saying "The sovereignty belongs to the nation" leads to disputes?

Some may consider this saying as an alternative to Divine Sovereignty. But when it was first voiced in Parliament as "Sovereignty belongs to the nation unconditionally," people like Tahiru'l Mevlevi, Mehmed Akif, Hasan Basri Cantay were there; they did not oppose this statement.

This means that it was not perceived as an alternative (to Divine Sovereignty) then, or that they had other things in mind. Perhaps, they understood this saying as being an alternative to the monarchic regime. They understood the new state to be a republican system where the government was selected by the public, much like during the time of Abu Bakr. If the state was seen as an alternative to the Sovereignty of God and if they remained silent to this, then they would have been "silent devils in the face of injustice." However, there were people with strong faith among them who would not have remained silent. If we look into the matter within this framework, there is no problem.

But some people go to extremes when it concerns secularity. They interpret laicité in a different way. Rather than a separation of religion and State, their approach is more like that of Descartes, who drew a red line between science and religion to prevent "territorial violations." The problem is not one-sided; they are being nourished by different sources.

What did you think when you saw General Ilhami Erdil in court as the accused, facing the judge?

It would not be suitable to comment on a case that is still in court; therefore I would like to answer your question from a different angle. There are two issues that should be carried out with maximum caution, but without confusion: first, the realization of justice; second, the human aspect of the person on trial. On the matter you asked, an almighty effort was devoted to attain justice; this was because there is an enormous interest and trust in the army in our nation, more so than in any other nation. Previous surveys showed that the Turkish Armed Forces ranks first in reliability. When improper words against such an institution arise, it is important for this institution to implement methods to vindicate itself, preventing itself from being worn down.

Therefore, the sensitivity of the General Staff on this issue was the necessary, appropriate attitude. As for the human side; I have never approved of demeaning or hurtful attitudes toward any fallen person—be they a general or an ordinary person.

I would like to press you for an answer as to what you really thought when you saw General Erdil in the court...

My heart caught on fire when I saw the General, his wife, and daughter sitting as the accused in front of the TV cameras. People in the institution from which he retired (the Armed Forces) are very sensitive about their reputation.

Those who are now publicizing their humiliation never erred in showing reverence to these same people when they were in the service; perhaps they even knew about these crimes, but did not dare to reveal them. It is not right to start showing on our screens their private lives; it is as if we are stomping on the head of a person who is already down.

I wish a gentler way had been chosen, without neglecting the necessities of the law. I would like for the media to give this issue more attention.

What about when you look at the case from the perspective of those who were hurt as a result of the crimes?

Even from that perspective, these two issues should not be confused. It is sufficient when justice has been attained. Once, I was in a certain place along with one of our state officials; he was in charge of an important position. The people there showed me some interest, by which he became upset; and then he did some things he should not have done because of the way he felt. It was sad what he did to me, all for something that was out of my control. Later, this person met up with disaster and he was arrested under very embarrassing conditions which appeared in the media. I felt sorry for him. What he did to me is different; the trial of those people who served in high positions in the State without dishonoring them is another thing. I wish there could be another method that would avoid the humiliation of those who once served at the forefront of the nation; attitudes that can disturb honorable people should be avoided.

Don't you think this would be favoritism?

If Turkey is a country of law, then everyone should be treated equally. But some people become more than an individual due to their positions and what they represent. If these people are seen as ordinary criminals, the way they are treated might overreach the limits; this may give rise to events like others being put under suspicion; this is a kind of conviction—at least at a psychological level. People may start to think, "This person is under arrest, but there are probably many others who have committed the same crime without being caught; there are bandits in this institution." Even innocent people who are not involved in any kind of corruption might also fall under suspicion. In short, absolute justice must be realized, but there are certain particular conditions that cannot be disregarded.