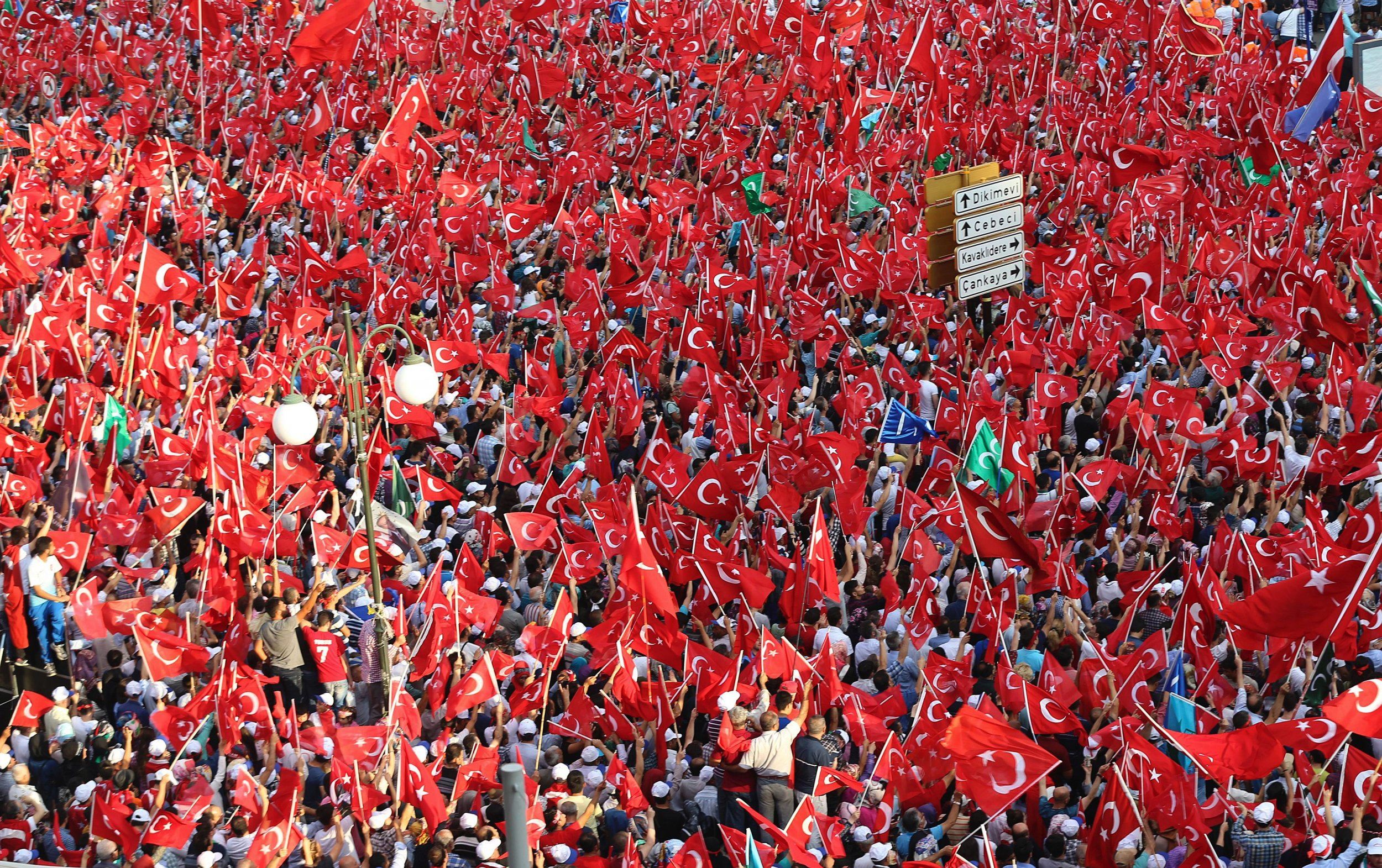 Written by Faruk Mercan. Posted in What went wrong with Turkey?.

No Return from Democracy

Many countries around the world are facing a crises of democracy. With authoritarianism on the rise, countries from Asia to Europe to the Americas are grappling with critical choices about government, minority rights, and the rule of law.

Foremost among these countries is Turkey. Once a shining example of a democracy in the Islamic world, recent years have seen Turkey fall further and further into authoritarianism. As it has happened, many people have turned to the renowned Muslim cleric Fethullah Gülen for his insights into his native country. In No Return from Democracy, a recently published book, Gülen’s thoughts on countless issues – fromIslam and Democracy to Minorities and Their Rights, and Terrorism and Jihad to Dialogue and Coexistence – have been gathered together in one place. His insightful, urgent analyses address both global problems and schisms unique to Turkey, such as The Kurdish Question and the Alevi-Sunni Divide.

No Return from Democracy was first published in its Turkish edition in February 2016. The purpose was to reflect Fethullah Gülen’s views on diverse topics, including Islam and democracy, politics, terrorism, jihad, Western civilization, women and human rights in Islam. What did Gülen say on some of the crucial issues in his interviews that spanned 25 years? The book was supposed to present a survey of his thoughts and highlight their importance in relevance to the time he voiced his ideas.

Five months after the book was published, a coup attempt took place in Turkey on the night of July 15, 2016. Only three hours later the incident started, President Erdoğan claimed it was Gülen who was behind the coup. The following days, Fethullah Gülen had multiple press conferences in Pennsylvania and wrote op-eds for many newspapers from around the world. Gülen answered claims about the coup and explained the background to his dispute with Erdoğan. He asked for an international committee to investigate who really were behind this coup attempt. He said he would comply with the decision of such a committee. Gülen said he was always harmed by all the four military coups in the past, and that he always stood against such interventions.

In 1994, when Gülen had said that there was no going back from democracy, politically active radical groups targeted him to the point of excommunicating him from Islam. In the same period, when Erdoğan was the mayor of Istanbul, he openly opposed the European Union, and said, “Democracy is like a streetcar. When we come to our stop, we get off. Democracy is not a purpose; it is an instrument.” [1]

In 2017, Erdoğan is accusing Gülen of toppling democracy.

Gülen said, Erdoğan does not believe in democracy, destroyed all democratic progress of Turkey, and staged this coup to consolidate his oppressive regime in Turkey. In his interview with Fareed Zakaria, Gülen reminded that Erdoğan defined the coup attempt as “a gift of God”:

“It looks more like a Hollywood movie than a military coup. It seems something like a staged scenario. It is understood from what it is seen that they have prepared the ground to realize what they have already planned.”

“In every coup d'etat, I the poor have been adversely affected. I have always been against coups, since I have spent my entire life with coups and pressures. I have the opinion that nothing good will come out of coups. Coups will divide, separate, disintegrate and make people the enemy of each other. This animosity will also affect future generations, just like it is in Turkey now. In this regard, as the common sense requires, I have always been against coups, and I curse them. I would curse people who resort to coups against democracy, liberty, republic. This is my general opinion.”

In almost all interviews, Gülen was asked about his past relationship with Erdoğan:

“Is it true that you and President Erdoğan were once friends and allies? If so, what caused the tensions between you that have led to this situation today?” Gülen’s response to this question by Politico, a journal published in the US, is as follows:

“Many observers called our relationship an alliance but in truth, we were never very close. I met him two or three times, all before he ran for elections. When his party ran for elections I was already here (US), so I could not vote anyway, but Hizmet sympathizers supported his party through their votes and their voices in the media. The reason for this support is not complicated. In going into elections in 2002 they [Erdoğan’s Justice and Development Party] promised moving Turkey forward in its bid for European Union membership by implementing democratic reforms; enhancing human rights and freedoms; better integrating Turkey with the world; ending public corruption, and government’s political profiling of people and their discriminatory measures. I and my friends supported them for these promises. Leading into elections in 2011, they promised a democratic constitution that would be drafted by civilians without fear of military generals. But after winning that election they began to reverse every democratic reform they implemented before. The democratic constitution was first conditioned upon the inclusion of executive presidency and then completely forgotten.” (September 9, 2016, Politico, Fethullah Gülen: “I don’t have any regrets”).

In his interview with Politico, Gülen pointed to another major reason for the dispute he was having with Erdoğan was the execute presidency system the latter was trying to bring to the country. For Gülen, this was something like a “sultan regime.”

“In the past, I did support the idea of a presidential system if it is to be modeled after the U.S. or France or other countries where there are checks and balances against the president. But Erdoğan’s proposal was akin to a sultan regime. I could not support such a system with a clear conscience. Erdoğan put pressure on me and Hizmet sympathizers to publicly support his idea of a presidential system. He increased the pressure by supporting government-funded alternatives to Hizmet institutions and then began threatening to close them down. If we complied with his demand and became loyalists, we would be enjoying the Turkish government’s favors now. But we declined and we have been facing their wrath for the last three years. This might be called the price of independence. It is a heavy price indeed but I don’t have any regrets and I don’t believe any of my friends have any regrets. My only sorrow is that the country continues to suffer because nobody can stand against his uninhibited ambitions.” (September 9, 2016, Politico, Fethullah Gülen: ‘I don’t have any regrets).

Erdoğan’s u-turn from democracy since 2011 was perhaps best illustrated on the cover of The Economist (June 8, 2013), which was featuring Erdoğan wearing the robe of a Sultan and the title read: Democrat or Sultan? Those were the days when a huge protest was underway against Erdoğan for his plan to build a shopping center on one of the symbolic parks in the very heart of Istanbul, known as Gezi Park. The brutal police intervention left behind 6 dead, 10 lost sight, 7,500 wounded. 5 thousand people were detained. [2]

It appears that the international community are putting side by side both Gülen’s and Erdoğan’s track records on democracy. When in 1990s political radicals considered discussions of democracy forbidden, Gülen argued that Islam and democracy were compatible, and there was no return from democracy. Gülen’s consistency in his views over time certainly must have a positive effect in his record.

Gülen’s views on Islam and democracy are the cornerstone of No Return from Democracy. Other topics discussed portray his thoughts on modernism, laicism, Western civilization and values, politics, fundamental human rights and freedoms, Islam and women, dialogue and coexistence, terrorism and jihad, the Kurdish issue, Alevism and Sunnism, minorities and their rights.

Gülen’s comments around these topics also shed light on two things: What kind of a world does Gülen desire? Why does Erdoğan want to annihilate Gülen and the Hizmet Movement he represents?

For example, in 1997, Gülen expressed his views on religion and politics. "The politicization of religion is dangerous, but it is much more dangerous for religion than it is for the regime, as it means sullying the spirit of religion."

After the devastating terrorist attacks of September 11, 2001, when many looked to the Islamic world for a voice of peace, Gülen said "A Muslim cannot be a terrorist and a terrorist cannot be a Muslim. A person cannot go to heaven by killing a person.”

A required reading for those interested in the plight of modern Turkey or seeking solutions to the world’s seemingly intractable problems, this book invites the reader to a journey through the horizons of all that Gülen has said in relation to these issues for more than two decades. Readers looking for hope will find solace in Gülen’s faith in democracy, the rule of law, and universal human rights. Gülen has never stopped believing that the way forward is not through violence and division, but through love, respect, and dialogue. If humanity adheres to these timeless values, then there truly will be No Return from Democracy.

[2] Four years later, on April 15, 2017, The Economist was published with a new cover: “Turkey’s slide into dictatorship.” Sultan Erdoğan was on his path to become a dictator.

Faruk Mercan is a journalist. He has worked in various media outlets that have recently been seized by Erdogan regime.