What is the "history" that you consider yourself to be a product of? 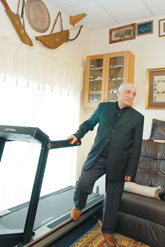 I have always had a longing for the golden ages (the time of Prophet Muhammad and the following century), but I cannot pinpoint any special period in history in which I can situate myself. As far as history is concerned, my heart strolls along the Age of Happiness (the time of Prophet Muhammad); Akif expressed this as follows: "If I had seen the Age of the Rose, I would have been its nightingale; O Lord what would happen if you had sent me then!" I personally believe that those ages will be lived once again, and I am very thankful to God for bringing us to the eve of this approaching time. In my perception of history, we are offshoots of our roots that are embedded in the beautiful periods of our nation. And society has been saved from a loss of identity by a connection with the spirit and the meaning of the roots.

By whom have you been most influenced in history?

Each of the four Caliphs was an amazing person in my opinion; they each had diverse aspects that were peculiar to each. For instance, Abu Bakr accomplished so much in his two years of service (as a Caliph) that I cannot contain in my vision the distance he attained; in order to fully comprehend him I believe the period in which he served must be x-rayed, in the true sense of the word. I am filled with even more admiration for Umar, who remarkably achieved to nullify his (carnal) self, despite his far-reaching expansions over a longer period (than Abu Bakr's). There is a profound meaning behind the words he said on his deathbed "I will consider myself happy if I can leave this world in the same state that it was when I came into it"; he demonstrated a top level of justice and he did not rely on anything else but God. It is said that Marx also admired Umar.

My eyes water whenever I remember Umar ibn Abd al-Aziz. I am fond of Fatih (Mehmed II, the Conqueror), and Osman Ghazi (the founder of the Ottomans). What Osman did may seem small when compared with Fatih's conquest of Istanbul, but Osman was the architect of a nation. With his military and political genius, he managed to fulfill every aspect of a grand formation, logically, rationally, emotionally, spiritually. . . .

What influence does Said Nursi have on you?

There have been many grand individuals whom I have admired throughout my life: Imam Rabbani, Mawlana Halid, Ghazali, Aktab-i Erbaa (four great saints: Abd al-Qadir Jilani, Ahmad Badawi, Ahmad Rufai, Ibrahim Desuki) and especially Shayk al-Harrani, Hasan al-Harakani, Akil Manji, and Muhammad Bahauddin . . . I have always had high esteem for these masters of Sufism and have studied their parameters.

Following their footsteps has been like walking behind the Messenger of God. The difference between them and Bediuzzaman, from my perspective, is that he belongs to the present age, an age for which he brought perfect interpretations.

In what ways are you influenced by his being a contemporary and by the way he interpreted the age?

His works are a recipe for the truths of belief, for those who seek them. His correspondence with his students were compiled as The Letters or Lahikalar (addenda), in which he specified rules of conducting service without fighting, creating chaos, falling into radicalism, terror, or violations of peace and security.

I am grateful to everyone from whom I have benefited, not just those I have mentioned here. I pray for them all.

I pray for Necip Fazil, Nurettin Topcu, Sezai Karakoc . . . they were each a source of benefit for the people of our day; I cite their names while on the tread-mill or in my room.

Attached to its historical, national, and religious values, Turkey is a country where its own interpretations that pertain to the religious life are more to the front. Turkey has distinctive interpretations with respect to the Islamic principles based upon the essential resources. A sense of belonging is related with proximity in terms of emotions, thoughts, logic, philosophy, and interpretation of life; on the other hand, certain major affairs will be undertaken along with those who share the same values and interests. This is a very significant reality in relationships between countries, but it does not prevent Turkey from entering the EU and realizing certain projects with the Europeans.

The current process with the EU is just a beginning and a bargaining stage. We need to look out to the horizon carefully. To the same degree that we appreciate what they have brought about in science, art, and the development of civilization, we need to realize that Europe, and to some extent America, are getting old. Although they shine like the sun in the sky today, this sun is approaching its dusk. Turkey, on the other hand, is experiencing the first glimpses of the dawn; it is a dynamic young country in the process of a resurrection. Rather than the present blinding glimmer of others, we need to look in the direction of the newborn or prospective gleams.

Turkey is a promising country in the future. I don't speak off the top of my head. Turkey is a reality and no other country will be able to contend with us in the future. We have tripped over so many times for various reasons, but we have managed to invent new systems of recovery each time. Today, there is much brainstorming in our country and the zeal for research has been revived. Our present situation does not lead down a blind alley; it indicates an effort for further exploration. Turkey will attain its rightful place in the world balance, provided that she can make good use of her dynamics. We should not ignore the fact that social movements take place across a span of time. They don't happen instantly. This nation will demonstrate its character sooner or later. "With my eyes half-closed, I am glancing at such a Turkey," as the poet said.

Can such a Turkey be carried by the present establishment of the state? A presidential system is also being discussed.

I think the presidential system is more favorable for Turkey; I have recommended it before. When Suleyman Demirel became the President, he proposed the presidential system; I was then worried that this proposal would go in vain because people could have thought that Demirel was proposing the system for his own benefit. Then, some said, "Demirel wants to be a dictator," which motivated others to take action against it. It was not even questioned then whether this system would meet our needs. A proposal introduced in a softer way, a way in which public opinion would be able to accept the presidential system would be more effective; both the French or American models would be beneficial to Turkey.

If this presidential system is on the agenda again, then the present models must be developed according to Turkey's conditions, their flaws must be analyzed, and the benefits of the parliamentarian system must be preserved. For a greater Turkey there is a need for this system, and it should have been realized long before. Our experience of state governing is more than sufficient to accomplish this. Those who are opposed to the presidential system do so not because they think it is irrational, but rather because of their oppositional approach.

Some may think "Gülen supports the presidential system so that it will facilitate the transition to the theocratic dictatorship that he aims to establish."

How can a person whose one foot is already in the grave accomplish this, even if he had such aspirations! He has not made any preparations for it; no preparations for governing even a village. Such claims would make everyone laugh.