In the past you have been depicted as a pan-Turanist, a neo-Ottoman, a nationalist, an étatiste; however today some call you pro-American, a CIA agent, or a Cardinal . . . How do such appellations affect you? 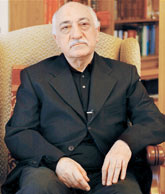 I have always been on the side of my nation. Not only is what is in my heart crystal clear, my position is as well. Even if one is aware of oneself, such displeasing imputations do affect one's honor. Even if a person were to be as stern as granite or the surface of the earth, vibrations happen when others jump on them. I try to remain patient and I say "O Most Forbearing," but I am still only human; I cannot say that I am not disturbed by these words.

I reassure myself with my belief that I might be purified, as if I had bathed under fountains, by such unfair thoughts voiced about me. I look into the Qur'an, which reminds us of the ignorant words used for the Lord of all the worlds and then read, "The Earth and the Heavens are shaken and broken into pieces after their words."

I then start to think; they called the Pride of Humanity (Prophet Muhammad) a poet, but that was not enough, they later called him an oracle; they said, "He took passages from the Torah and the Gospels." I say to myself; "How much the soul of such an honorable, distinguished person must have been wounded by such baseless, ugly words." And there remains nothing else to do but ask myself, "Who do you think you are that you exaggerate to such an extent the words they use against you?" But still, to be honest with you, I feel the need to engage in much prayer to free myself from such thoughts and to recover.

Have you at times had to reassure the people in your circle about such things?

Those who are fond of me are comprised of my former students, who still continue to be as one, friends, distant or close, and people with whom I share the same perspective of service. I know some of them by name, while perhaps the others' faces I have only seen once, but I always remember them when I see them.

If these friends were not to believe in the logic of serving others, it would be easy to disperse them. On the contrary, they have stood firm during the most devastating storms, with no need of reassurance from me. I can even say that some of them comforted me (at certain times).

I will never forget a visit of a very precious friend who came here during that stormy period (of conspiracy). He said, "I was walking along Bagdat Street (a street of high society in Istanbul) and I passed a young couple; I heard the girl grumbling in protest to the boy, 'You know, they have said so many repulsive and unpleasant words about the Hodja whom we have always associated with "dialogue," that I could not sleep all night." My friend then said, "You must be assured that this is the opinion of Turkish people." My friends stand as firm as steel. For the fury and harshness of those accusing me it is sufficient to say, "This is how they interpret (ijtihad), and they err in their judgment."

Those who express negative views about me, who manipulate the public's way of thinking, and who strive to form public opinion against me cannot all be insincere.

I believe we would not have been classified in this way if they would have interpreted our actions and behavior by taking the reasons behind them into account. The surveys that were conducted by others who were completely unrelated (with me) during the roughest storms (of conspiracy) proved that a compelling majority approved of our actions.

During those days, saying "yes" to our actions was a great danger. Despite such results (of surveys), unfitting reactions developed, and it was not realized that public opinion was, in fact, being totally disregarded. Everything is perfectly obvious. This situation could most suitably be described as "Apart from the truth, what remains but error?" (Qur'an 10:32). But (still) this (verse) sounds too profound to use for me, so I would rather say, "Perhaps there is something I don't know, but they do; or this is because some action of ours, which was open to misinterpretation." As a result, they are wrong in their interpretation (ijtihad), and according to fiqh (Islamic jurisprudence) an error in interpretation can only bring one reward (ijtihad: an utmost effort devoted to reach a logical deduction on a legal question in order to attain the truth).

Leyla Zana and her friends published an announcement in the French press saying that Turkey should become a truly democratic country which respects cultural variety and political pluralism, and that Turkey must guarantee the same rights for her citizens of Kurdish origin that are demanded for the Turks in Cyprus. The Prime Minister said this was paramount to suicide...

The views of politicians are not always as definitive as the law. But it is impossible not to agree with what Mr Tayyip (Erdogan) said. The second and the eighth presidents of Turkey, Inonu and Turgut Ozal, were from Malatya (a city in the southeast of Turkey) and they were Kurdish. Hikmet Cetin (former Secretary of State) is also from Diyarbakir (another city in the southeast of Turkey). Many of our citizens from the east and southeast of Turkey assumed important positions in various offices of the government; soldiers, governors, mayors . . . There are numerous Kurdish citizens in the Justice Department. In the face of this reality, what deprivations are being suffered that such demands (by Zana and others) are proposed? The demands listed in that announcement were disrespectful, in my opinion. In the past, another disrespectful act was committed (by Zana and others) in the Parliament, which should never have happened. I have heard and met many people, and as far as I know 90-95 % of the citizens in the Southeast do not support such demands. They are perhaps more concerned with the perpetrators of provocation, who push the youth into the streets to throw stones and burn cars, and those who surface with tough talk (like Zana and others). I estimate that the number of all those people who instigate the mischief in the Southeast has never been more than 500; but as they attack in a hit-and-run manner it is not easy for an organized force to fight them. For me, the actions that lead to turmoil are not a form of bravery. I have never understood the harassment of public opinion by the crude attitudes that some people engage in; people who are educated and have attained a certain status, and some who have even been elected in the past.

The government took a conciliatory step by setting people free. I would expect them to return this gesture by saying, "We have been mistaken for our nation in the past, we were moved by our youth"; they should have taken a path that lead to unity and integrity. This did not happen. They owe an apology to the public.

In the '80s you called people to mobilize for central Asia. There were times when you fainted at the pulpit in those days. Thousands of people have gone, opened schools, started business, and settled there. Students have started to graduate. But you have never gone there...

Although it was contrary to my logic, it was very important for me emotionally to see the blessings God granted for my friends' efforts and to share the enthusiasm with them. Asia has always been in my prayers since my childhood; hugging our fellow brothers in race and religion is an occasion of rejoicing for me.

Then the day came when I encouraged businessmen and industrialists to go there. I occasionally thought about going and joining in the efforts with those who had lent an ear to our call and who had gone there. As a matter of fact, the Sufi tradition teaches us not to pursue worldly pleasures. According to my own philosophy, one should not even pursue any pleasure that arises from worship and the knowledge of God (marifa). We should love God to the utmost degree. But when it comes to seeking pleasure from Him, then I would say, "No! God is sufficient for us. It is not proper to have other expectations."

As a human being, many times I wanted to see in person those people who organized the educational activities, sometimes by working in the construction of the schools, at other times lobbying on behalf of Turkey by getting in touch with officials, acting like diplomats, and, mostly, doing all these in return for nothing or for a small scholarship. God did not grant me this pleasure, due to various reasons.

Has your logic prevented you from going there?

Two issues are important to mention here, logically speaking. First, my share in these activities which belong to an entire nation is very small. If I would have gone, despite this reality, I feared that it could have been perceived as if I were appropriating what all my friends have accomplished and it might seem as if it were my ideas that were in the background.

Moreover, some people are inclined to attribute accomplishments to those who appear to be in the front. This inclination may reach a level of shirk (associating partners with God). Putting myself behind all these activities would be an act of tremendous tyranny or injustice (zulum). Tyranny is an obstacle to belief and an equivalent to shirk. Asking God for His blessings to be granted in the Hereafter, (I thought) it was better not to go. Secondly, I was afraid that some people might have harassed our friends there, saying, "There are these people behind these activities; they have different objectives, although they haven't revealed them." I buried my desires in my heart in order not to cast a shadow on the services of our friends.

Do you abstain from being seen?

I am not a man of modesty. But, I feel shy even among people I know. This was the reason why I retreated into the niche of the mosque in Edirne. This is something to do with my nature; I feel embarrassed when people take an appreciative or a critical look (at me). If I had gone to the Turkic world, people would have embraced me as if I was the designer of these activities. I perceived this as being unnatural. Some may think this is kind of a complex. I don't claim to be a person purified from all complexes. Whatever you call it, I have this shyness in my nature. Moreover, there is no need for me to go there (to Central Asia).