"This Movement is Independent"

Under normal conditions, for a movement of these proportions it would be impossible to stay independent, outside the politics, or free from other influences. How do you explain the fact that this movement has not gone down this road? 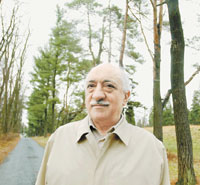 Our biggest capital in the sight of God is the consciousness of our weakness, our poverty, our insufficiency and therefore our need to pray to Him for reinforcement. The services that have been realized cannot be explained by inspiration, wondrous achievement, outstanding intuition, or genius.

We are aware of our deficiencies, weaknesses, what we lack, and even at times of our inconsistencies; we cannot associate any success with ourselves, or attribute anything to our minds; there are much more intelligent people in Turkey.

Although with every passing day new conspiracies are hatched against this movement, we observe that the enthusiasm of our society has not been shaken and that they have continued walking on this path; then we say that "this outcome cannot be attributed to our thoughts and efforts; God Almighty drives us into certain places and makes us do some good things in order to serve our nation;" this is something for which we are very grateful to Him.

I should once again say gratefully that it is very important that this movement is independent; this is something that most attracts the attention of both local and foreign researchers.

To bring this movement into a position where it must beg from others, or bringing it into involvement with, for instance, politics, would obstruct its independence, pierce its formation, and crack it; this would be very dangerous.

If this is a matter of belief, if making known Turkish culture, which is a few thousand years old—or even the thousand years where a marvelous expansion was experienced—or if making Turkish a world language are a matter of belief, then these can be realized by volunteer heroes only; to aim for government or politics, to become dependent of these sort of things would damage this movement. This is the essence of the movement; but perhaps some of our friends' actions or the arguments to which they referred may not have been understood correctly at the first encounter.

What could have been misunderstood? Can you give some examples?

For instance, some say "they go (to so many places), but they don't do anything at all, other than giving courses in English," or things along the same line. If you do not follow the curriculum of the country you have gone to, why would they allow you to operate? Would they allow you to teach Turkish as an elective course in some places, and make it compulsory in others? We say dialogue and tolerance—this is being questioned too, though—but if you do not take a step forward, if you are not respectful to others accepting them as they are, or if you do not act with due maturity in order to share certain things with them, then they will not take a step toward you.

These are activities that facilitate the representation of our own values; otherwise, if you persist on being strict in your manners, you will not be able to explain anything to anyone, even if you yourself organizing everything. It is due to these artificial gaps between people that we have not been able to explain about ourselves; we simply could not find the opportunity to do so, just as we could not come next to one another.

Some may find these activities odd, but all of them are performed just for the sake of the lofty ideal of expressing ourselves, of contributing to new formations in the world, and in the long run, of preventing the future chaos that has been outlined by people like Huntington.

A quotation you used in one of your former articles from Semsettin Gunaltay was a matter of argument in the press . . . (Translator's note: some columnists in the Turkish press accused Gülen of quoting from Gunaltay without mentioning source.)

I have said on several occasions that I have benefited from various people. Gunaltay, Nurettin Topcu, Necip Fazil, Mehmet Akif . . . I have read Ismail Safa's poem on the Qur'an and works by Peyami Safa with pleasure. There are things that I agree with in what I read, as well as things that I don't agree with. Among the people whom I read are those who made criticisms about each other. For instance, the late Topcu was severely criticized by Necip Fazil, whom we admire so much, in his Rapor.

Instead of getting snagged on negatives, I prefer to love both sides. Mehmet Akif was influential on my ideas much before the Risale-i Nur, with his vision, sincerity, worries, and the framework he proposed for education and the system of learning.

Semsettin Gunaltay is the same for me. He was prime minister for a period; the Ankara Faculty of Theology was opened during his office; unfortunately, permission for article 163of the Law appears to have been granted by him. (Translator's note: This article of the Turkish penal code, which was abolished in 1992, was the basis for putting people under arrest on "propagating and imposing on others religious ideology in order to change the essential structure of the secular state . . .") Therefore, there are things that we approve and things that we don't. There is one issue we need to underline at this point.

When a person spends a lot of time with certain people (or their works), they become an accumulation in the intellect. You express the same meaning with them, but in your own style, without being aware of it; perhaps you say exactly the same things like tevarud in poetry (translator's note: tevarud in Turkish poetry refers to the coincidence of a line or a couplet expressed by two poets exactly in the same way and at the same time.) Sometimes you call this a "style" but you don't remember to whom it belongs, or you simply say "this is how it is in the words of this and that person."

I express something without being aware of it, which later appears in books, and then I realize when I read it there that I gave the same meaning as given in the Risale-i Nur, for my mind is so much imbued with this. The meanings, implications, and concepts Mehmet Akif used in his poetry have appeared so much in prose that I can find countless of them.

Can you clarify a bit more with an example?

For instance, think about this rule in Majalla (the Ottoman statute of jurisprudence developed in nineteenth century): "Forbidden things are allowed to the amount of necessity." I may use this rule not exactly with the same words, but rather, something like "People may suffer from some troubles, a fatal danger may occur for them or their children, and such circumstances may make certain forbidden things allowed." Although I don't use the same words, I express things that are related with this rule. Just as in this example, implications and meanings might have entered in our words and lines.

There are things that have remained in my mind from all the people whose works I have read, like Sartre, Camus, or even The Lily in the Valley by Balzac whom I read, although I don't like his romanticism.

I dictated the article about which all the fuss was made that caused suspicion to arouse in people's minds, to a friend in 1984. I did not put my name to my articles in those years. Other friends who contributed to Sizinti magazine humbly preferred to use a penname or would have their articles published anonymously, in order not to make the beautiful contribution seem as if it were a property that belonged to them.

There is no author mentioned in the lead articles of either that issue of the magazine or any subsequent ones. We were not concerned with "I, you, he, or she" when writing it, but rather we desired to share useful thoughts or ideas and things that we liked with our nation. The publisher had already made an announcement that during the typesetting the proofreader mistakenly missed the bit "in the way of Gunaltay."

Any accusations made that disregard all these factors would be merciless, in my opinion.