What is the main difference between this movement and other Islamic movements in the world? 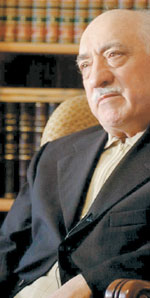 It would not be correct to perceive all Islamic movements in the world or in Turkey along the same lines. Some of them are philosophical, whereas others ascribe priority to action only; some others are devoted to presenting Islam to the contemporary mind by referring to the earliest sources.

Can you name some of them?

Movements in India and Pakistan, for instance Shibli or Nadwi, regard the purity of the earliest sources to be more efficient in guiding people, and they act in accordance with this credence. Hasan al-Banna, who also has a Shazali side, founded the Ihvan in Egypt; when his epistles are studied it appears that he stresses iman (belief), which makes Ihvan resemble the movement in Turkey. But the people whom we can call his successors have pulled his movement into politics.

When the religion is made servant to politics, the religious feelings of people are manipulated; the religion has been approached disrespectfully and the movements have brought about no result. For instance, there used to be a Mahdi movement in Sudan in the past; today there is Turabi's movement there. One may perceive Turabi as a transformed representation of the Mahdi movement, which was brought to an end by the British. Both the Jamaat Islamiyya of Mawdudi and Ihvan Muslimin have been shaped into different molds over time, and one may detect some radicalism in the actions of the successors, the reasons for which must be analyzed.

Do you have an analysis?

They have accomplished independence much later than us; it can even be argued that Turkey posed a model for them. In captivity and under the dominance and tyranny of the West, they developed an ideology to help them be victorious. They thought this could only be possible via the State, so their first reflexes and reactions were to take over the State.

Turning back to Turkey or your movement...

Some call this movement "originating its own models," a tariqat. Forgive me for saying this, but those people are speaking without knowing what they are talking about. Tariqats are banned in Turkey, as is known. Today, perhaps a very small number of people represent and preserve this culture that has come down from the past in their circle, and try to practice it with their family and others who sympathize.

I would like to mention something here that is rather outside the scope of the question: Reactionary movements cannot be successful, no matter how powerful they are, for the balance cannot be maintained; on the contrary, they prove to be more harmful as people fall into extremism, thereby causing a reaction on the other side. Violence brings about violence from the other side, too. Positive action is essential, i.e. telling others of the essence of something, and not going to extremes carried away by one's reactions.

What are your criteria in this respect?

Before it was organized, this institution (religious orders) was in the hands of most pure individuals like Abu Yazid al-Bistami, Junayd al-Baghdadi, Fudayl ibn Iyaz, and Ibrahim Atham. Ghazali was in control of it; he did not establish a tariqat, although he acknowledged the system. People like Imam Rabbani, who controlled the system, had a certain discipline. For instance, (in a tariqat) there are shayks and people apply to join. If the applicants are found eligible they become a murid, which means "one who wants."

If a person is accepted, then they are affiliated with a murshid (teacher). "A movement originating its own models" does not have any affiliation or disciples. I am a person who has traveled quite a lot, but I can't say that I know these education volunteers in Turkey even at a ratio of one over a thousand. My idea is that they are willing to discourage people and push them out of it by relating this movement with something that is banned by law (Translator's note: After the establishment of the Republic, a law passed on November 30, 1925 banned the activity of religious orders in Turkey). Experts may produce long analyses about what a tariqat is, what Sufism is, and whether or not this movement falls into these categories. They are speaking off the top of their heads; they call it tariqat on one hand, and they associate it with Bediuzzaman in its origins. If this is the case, they should not make such an association; because perhaps in a hundred different places (in his works) he says, "this is not a tariqat, but the truth."

What do you mean "they are talking off the top of their heads"?

A tariqat has a certain discipline. As Bulent Ecevit once said, a tariqat has a certain place in our culture. Even if it is banned and no one performs it, rejecting a tariqat would be rejecting one of our own values. There may have been abuses on this issue, but is it possible to designate any institution—even the most important ones—in Turkey that has not been abused?

Are they correct in making this association?

Bediuzzaman addressed his students in some of his letters as nurcu (supporter of the light - Risale-i Nur); he did not worry that this could be manipulated by others. (Translator's note: In Turkish, -ci, -cu are suffixes added to the end of the words to suggest a performer of a certain action or someone actively involved in something; in this case nurcu refers to someone who is related with the Risale-i Nur movement.) I have expressed many times on various occasions that I have been irritated by descriptions like nurcu or fethullahci; for me, these are separatist addresses. But, Bediuzzaman does not use these in a way that irritates me.

He says "Yes, we are a jamaat; we are members of a jamaat which has a following of 350 million every century. The Qur'an is our guide, the Messenger is our tutor." What he is implying by using the word jamaat is that all Muslims orientate themselves to the Ka'ba when saying their prayers. Even though he called some of his special students nurcu because they studied the Risale-i Nur, such suffixes were not essential for Bediuzzaman, in my opinion.

What was essential for Bediuzzaman?

What was essential for him were the guidelines he proposed in his works that were devoted to the belief in taking action without disturbing any one, at a time when things were not very favorable in Turkey, or at least when some officials were acting arbitrarily. He taught his students by writing letters to them and he said that his aim was to save the belief of the people, and that this was not a tariqat. In reference to Imam Rabbani he said "The expounding and flourishing of any single issue related to belief is preferable to thousands of spiritual pleasures and wonders, i.e. issues sought in Sufism."

Do you have any relation with those essentials that you regard significant?

If a person has benefited from any other person on matters like the truths of belief, the way of conduct, the priority of human values, then it would be ungrateful, disrespectful not to acknowledge this. Even though I don't agree with them a hundred percent, I read all works by Nurettin Topcu, Necip Fazil with great pleasure. In my very early youth I read Mehmed Akif with great pleasure. Although I took classes mostly in Arabic as part of my education, I also read Ahmed Hilmi of Plovdiv, Semsettin Gunaltay, Tanpinar and benefited from them. If I was to disregard these or undermine them, then that would be a demonstration of disrespect. But Bediuzzaman had a great influence on my ideas.

I have benefited a great deal from Hamdi Yazir and Mustafa Sabri, as well. I consider them as my teachers.

This movement seems to have three dimensions: sociological, cultural, and religious. What does the movement aim at?

The world was introduced to problems by humankind; it started as a slip with Adam and then revealed itself openly with his children. Problems will grow bigger until solutions are sought in the human. This (solution) can be considered as the cultural dimension.

Today, societies seeking solutions at the grassroots with a wide scale of participation and taking on things that are useful to them is more promising to last longer than government initiatives. Even the most genius measures taken at a local level would not ensure permanency. What matters is the acceptance (of the movement) by the society as cultural or moral property. Things are developing toward that direction these days. When it yields a result, the opposition of those against this movement will diminish—although we don't know why they are against today. Our nation is reasonable. Those acting seemingly unreasonably will be outnumbered by time—I say "seemingly" but some are disturbed even from my respectful manners and accepting all as they are—thereby people will then be more confident to support this useful movement.

Religion, especially Islam, is a natural phenomenon; when natural disposition is backed up with religion, it will earn a power which cannot be supplied from anything else. Belief which is the most fundamental issue of religion is a power source on its own; a person can challenge anything and resist any difficulty according to the level of their belief. Nevertheless, religion can become an instrument of hatred by some people, if people insist on "my belief, my philosophy, my understanding," and the way of teaching about one's faith cannot be sustained. The most important thing is to be real believers and a true believer cannot live dually; in the words of Yunus Emre "what leaks out is what is inside." If it is religion that leaks out, then it will be influential upon others.