The Patriarch's Ecumenical Status and the USA's Policy in Iraq

What would you say about the Orthodox Seminary (Halki, Heybeli Island) and Ecumenical status? 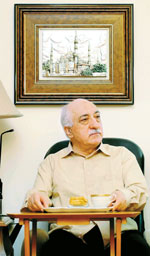 This issue is a state policy; therefore each statement should be construed accordingly. The Patriarchate is already operational. I met with the Patriarch many times. Before my first meeting with him, we informed the state officials in advance in order to ascertain how we should approach the matter, as I already knew their demands. I will not go into further details. Ecumenical (universal patriarch) has been the for the top person of the patriarchate since the day it was established. Naturally, they are still using this title. They act independently and have certain claims. The American Embassy regards them along the same lines. Instead of building policies in accordance with these actions, we must first consider on what grounds they make such claims. You may disagree with their calling themselves "ecumenical," but this is how they have used this term up until now. Similarly, there are no titles like hocaefendi (en lieu of teacher), vaiz effendi (en lieu of preacher), or mufti effendi; but they are being used, as this is what people are used to. I don't ask to be called by such a title, but our people call me hocaefendi, too. This aspect of the matter should be taken into consideration.

What is the aim of the Patriarch?

When I met him, he had the following demand: "I am a Turkish citizen. I would like to be given the opportunity to have the Seminary re-opened, so that we can train our staff and send them off to the rest of the world from Turkey." I conveyed this message to one of the former presidents, whose reply was "He is a clever man"; perhaps he thought differently. I say cleverness should be met with cleverness. It would be beneficial to Turkey if priests were trained in Turkey and within the Turkish culture. Such a practice started with the sultan, Fatih (Mehmed II, the Conqueror) and has continued to our day; if this is going to be a solution (re-opening the Seminary) we should not make it a problem . . . I hope that it will not be opposed just because I am speaking up for it . . . I cannot support any possibility of disintegration in our nation, even if it is only for ten people. I cannot permit this. This is different. What Turkey will gain or lose needs to be estimated. Reacting with emotions or associating the matter with hostility is not suited to the Turkish nation, which has a mature, settled, and marvelous past. On the other hand, if there have been complaints to the EU about Turkey, and if they have asked them to apply pressure on the "ecumenical" issue, then this is improper of them. I think they need to speak with the government about their problems.

Your being in the US is a matter of criticism and some suggest associations with the US plan for a Greater Middle East, a theory of Northern Africa and a Green Belt. Some ask you why you did not go to Germany or France, while some others say it would have been more suitable if you had gone to Saudi Arabia or Iran, saying, "If he is a good Muslim, why does not he go to these countries, rather than staying in the US?!" Why America?

There are things that happened before my coming here. I first came here in 1997 for an angiograph, and stayed for 2 or 3 months. The President, Mr Suleyman Demirel, provided a reference and called Dr Murat in Cleveland, to whom I am very grateful for attending and guiding me; he insisted on an operation. Even then, some said, "Why America, why does he stay there? He has escaped." However, when I returned I did not have enough strength to even remove my quilt. I was using the medication which the doctors had prescribed. I exercised on the tread-mill or walked outside. But my condition was not stable. I came here again for the same reason. Dr Sait from the Mayo Clinic, who is originally a Crimean Turk, saw me when he came to Turkey and insisted that I should come to the US. If such an invitation had come from Germany, I would have gone there. I came to the US, and the treatment was started. 1or 2 months later the conspiracy blew up in Turkey. And I had to stay. I wanted to go, but the doctors did not allow me to. "You are putting yourself in great danger," they said. There are countless reports about my health, which is obvious. Why should I escape, what do I have to escape from?

Some say about you that you have one foot in the US and the other in Saudi Arabia.

Last time I went to Saudi Arabia was in 1986 for hajj. I have not been there in the last twenty years. If I had been, those people would interpret my actions differently, like "both his feet are there." Perhaps, they would raise different questions. Iran would be a worse problem. To be honest, I never had any contact with Iran. Iran did not welcome proposals of joint activities of Turkish origin for education, cultural, and dialogue.

I don't think I or my friends would be welcomed. We never thought this way. If I had gone to Iran, some people would then say, "The eye and ear, hand and foot of the West are in Iran." As long as their hearts are corrupt and they have a certain image about you, they will continue making such comments. We don't have a duty to shut their mouths. There is freedom of thought and expression. If this freedom is violated, it is done only for us, and that is enough.

How do you evaluate the political process into which the US has entered since 9/11?

I am under no obligation to evaluate 9/11 and its aftermath either as the Americans do, or as others do. Towers were destroyed, and other events occurred in some places. These atrocities might have been planned and carried out by perpetrators who had gauged the US reaction. They had planned what followed up in Afghanistan and then in Iraq. If there are such people, they made a good plan and hit the bull's eye. They triggered a series of atrocities that will take place on a global scale.

This has brought about problems which cannot yet be solved. The methods used to solve problems will always be open to question. What is clear is that more problems are being created.

For instance, Iraq is about to disintegrate. Could this have been prevented? Would Turkey's influence have been sufficient? Do the reactions of neighboring countries mean anything? Or is this how this matter will go? This puts the Middle East in a serious jeopardy. Other countries may follow (Iraq). This was an excuse in the beginning for those who had planned it.

However it has come about, the US is now facing a serious impasse.

How was the US mistaken?

In many ways. When they were about to take action, we asked a few Turkish academics, with whom we had close relations, to convey our message (to the US officials); i.e., that they had better not do it, and we informed them about our concerns for Iraq's (territorial) integrity. They responded that "they (the US officials) are not in the proper mood to comprehend the matter in this perspective. They are determined. They seem to fully believe the information provided for them."

It was later seen that the CIA's information wasn't accurate. This means that there were people inside who wanted things to happen in the way they did. Perhaps these people reported false information. A giant state has entered an adventure, like in Vietnam. Although they announce that they are successful and that they will realize democracy, it is more commonly said that Iraq's destiny is not under control. They cannot even work out how to take a step back. They are making plans about whether they should stay by starting a fight between different groups and then consolidate their role as arbitrators. Should they retreat? Or should they expose moderate Muslims and break the necks of others? They are now pursuing an attempt to save their reputation while still trying to realize their expectations.

If you had been able to reach the Americans before the operation, what would your message have been to them?

The US is an important country in the world balance. So far, it has been known for its democracy. It should not have wasted its credit so cheaply. They lost their credit. They lost their reputation. From now on, even if they will continue using brute force, logic would require them to retreat two steps. When brute force is in play, reason cannot be fully employed. More brainstorming should have been done, and alternative solutions should have been developed. The peace and integrity within Iraq should not have been destroyed. The balances in the region are upside down. And if this situation prevails, there will be more chaos. The balances have changed to the disadvantage of Turkey and in favor of others. Iran will be more prominent, with the Shiites in their alliance.

Is Turkey aware of this balance?

I don't think they are, completely. There are Zaydis in Yemen who favor Ali. All balances ranging from the Middle East, Yemen, and extending down to mid-Africa have been overturned. Turkey should raise her awareness.

What is the significance of Iraq?

After Turkey, Iraq stands out like Everest. When you look from there, you can see the steppes of Asia under your feet. It is like the dome of the sky. Hulagu did not set up his tent there in vain. The Abbasites stayed there from the second century (after hegira) until they handed over the caliphate to Yavuz (Selim I). The Zangis, Selcuks, Ilkhanids, Karakhanlis, and the Umayyads all knew about the region's significance. The control of the East and the Far East can be managed from there. The plans of today address the dominance both in the region and in the Far East. The present result has not turned out to be in their favor. The Sunnis never wanted this, despite the severe repression of the Saddam dictatorship. I wish it had been meant to topple down Saddam only, and that integrity had been ensured by bringing together people of Sunni, Shiites, Kurdish, and Turcoman origins. By way of such a soft administration, their reputation would not have been harmed. They would have been regarded as an apostle of democracy, in the real sense, and admired in the Middle East. Many mistakes have been committed. It is very difficult now to tell people of the region that there are good intentions being pursued here.