Unsolved Murders and February 28th 1997: Before and After

You have made statements in the past, like "Unsolved murders may take place"; these have been likened in some ways to intelligence reports. Just recently it was written in a newspaper that you are being informed any event a few minutes before the President, the Prime Minister, and the Chief of Staff. Nazli Ilicak once wrote, "Gülen's intelligence is powerful. He foretold February 28th." Is your intelligence really this powerful? 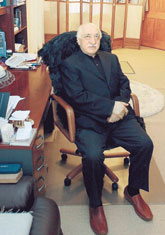 I don't have an intelligence service of my own. However, as a Turkish citizen I am deeply concerned with the destiny of my nation. If a person does not pursue any personal interests, then they spend all their time on whatever cause they have devoted themselves to. I listen to everyone to whom I have access. I scan various newspapers and search news published on the internet. I interpret these news items, reach certain conclusions, and express these. There are so many people who travel and see, and then report everywhere. Such things happen on the internet; why cannot it happen via e-mail? Some people may hear about a certain thing from a very critical place, and may express this information as "such plans are being made." I may hear about it in various ways. No matter how secret something is, information retrieval has become very speedy, thanks to the communication (technology) of today.

Did you really report February 28th in advance?

I had had many concerns about the February issue, as Nazli Ilicak wrote. As a matter of fact, I even assumed a very different style of expression, contrary to my own. I had concerns about the government at the time. They were nourishing the philosophy that brought about the events of February. This philosophy grew upon their (the government's) manners and actions. I consider my attitude then as being disrespectful, as I had never spoken or thought like that before; but I expressed my views on a TV channel in the very unfitting words of "They have messed up." These words were an expression of my concerns.

Did you share your concerns with the authorities of the time?

I did much more than that before this time. I conveyed my concerns in diverse ways and methods, through several ministers. I said, "This is very serious; there is much more going on than you know; there is no more tolerance left; we cannot survive as a nation, we will suffer."

What was the response to your warnings?

They did not care. They did not pay any attention. With the support of this nation there are good things being done; at that time gates were opened to destroy them. In view of all these, I revealed my thoughts, whether I was right or wrong. If I was right, then I carried out a duty of loyalty to my nation.

Possessing the same sensitivity (toward my nation) I humbly listen to and interpret news, and try to reach an interpretation. I find it useful for my nation and country to express my views on some of these.

Have your warnings regarding possible unsolved murders reached their target?

First of all, (by way of such warnings) those who are in charge at the Intelligence, Security, and Jitem (Gendarmerie Intelligence Service) have been informed, and thus, if they fulfill their duties they will prevent (murders) while the plot is being hatched. Secondly, the conspirators or provocateurs that would be employed might undertake any action, or they will give up when the nation becomes aware of what is going on.

Our nation will gain from this. I had such concerns, and the outcome has been in parallel with these. There is nothing to disregard in this matter.

Similar things have already happened; bombs have exploded in front of a synagogue, didn't they? They still continue to happen in Turkey.

University students carrying axes and cleavers are not good news. It is impossible not to see what may come next.

Some people criticized you for this.

Well, some may say, "Are you an intelligence agent? Why on earth are you concerned with these matters? If you are an imam at a mosque, stay where you are and behave like an imam. It is none of your business." Such people do not know what befits them and what does not. I would not say the same things for them. This is improper. A Turkish citizen, with a particular past, 66 years of age, even if he hasn't read or thought anything, would still be aware of many things and still would arrive at certain interpretations of what is going on, with silent resentment. The statements of such a person should not be disregarded. Any other way of thinking would be simply crude.

Do you still have concerns for future unsolved murders?

To some extent. Those people, who seek to attain their goals by such means, never give up completely. And I preserve this viewpoint. There are people, both inside and outside, who do not want Turkey to recover and become a powerful state. Even they cannot destroy Turkey.

Can you clarify that "inside" a bit more?

Perhaps it is more important not to define it, rather to leave it as a general statement. There are always people who run secret affairs. Some of those who are "inside" are involved in the foundations of state-like establishments around us (Turkey). There are people in every section of the society who cannot put up with or stomach Turkey.

There is no need for further explanation. Even a statement as short as "secret organizations" has disturbed some. One cannot help but be astonished when one sees all this.

Why are some people disturbed by expressing views that arise from certain possible concerns? If you are not a member of a secret organization, then why are you offended? Secret organizations have always existed; this has been reported by the state, by the security organizations, and they are being revealed at courts of justice. There are various kinds; some deal with emptying the treasury, while others organize bloody murders.

We see what has come out of apparently simple thefts, purse-snatchings on the streets done by children; even a mayor was blackmailed for such crimes.

If one argues that there are no secret organizations or associations in the face of all these, then he or she has a different problem.

The European Union prefers to categorize the Alevites as a minority. The Alevites demand that their "cemevi"s (places of worship) become legal, and would like to be represented in the Directorate of Religious Affairs. What is your approach to this matter?

To date, the Alevites have not faced serious problems in Turkey. In the first years of the Republic, some problems occurred, and perhaps they were even harassed. However, today, Alevites are found in every strata of society; they can be anything they want to be. They can establish political parties, join the army, and become governors. As a section of the Turkish nation, I cannot understand why some of them opt for minority. The state has laws which ensure that they can have education anywhere they like. Perhaps, they want to have some of their teachings to be on the agenda. I remember saying to some of our Alevite brothers some years ago: "This cannot be maintained by oral culture. Let's compile them in books." I think that the Directorate of Religious Affairs has started such a project. An Alevite collection can be realized by bringing 15-20 books, like Ahmet Yesevi's Hikemiyat and Haci Bektas' Makalat, together. If it can be deduced from these books that there is a need to establish cemevis, then this should be provided to them as a democratic right. Cemevis already exist. However, some institutions might be abused for being the cause of some ideologies; the fact that cemevis have been abused in a similar way-despite Alevite citizens disagreeing about this in some cases-has put them in a difficult situation. In past proposals we suggested putting a cemevi next to a mosque. (I think) cemevis can have a legal status.

Some Alevite groups lobbied in this regard in Europe before December 17th.

If some Alevite citizens are complaining to Europe about Turkey, I would regard this as improper, just like I did when some Kurdish people complained in the past. There is a Turkish nation in Turkey comprised of Turks, Kurds, Alevites, and Sunnis. If they feel that they are Turkish, then there is no difference between us.

What about the Alevites' demand to the Directorate of Religious Affairs?

The Ottomans were Hanafi, therefore fiqh (Islamic jurisprudence) developed accordingly, especially in the details. But this development did not occur by devastating others. After the Republic, the Directorate of Religious Affairs was established. Alevites can certainly study at schools opened by the state or the Directorate. They can become an imam for their mosques, if they have such mosques; they can lead their religious ceremonies in their cemevi. If Alevites argue that they are a different sect (or religion), there are Nusayris, Armenians, Syriac Christians, Greeks, Jews, Protestants, Baptists, Bahaists, and Wahhabis in Turkey, too; and they might also come up with a demand for a status if they like. If Alevites are a religious order-Haci Bektas-i Veli's system and method are considered to be like an order-then all orders might demand a status, too. But orders are banned (in Turkey). I think such demands might cause some problems and result in further chaos in Turkey. For instance, some time ago-before February 28th-democracy was considered to be much softer than it is; some people made it to the streets, although this does not exist in our Sufi-spiritual tradition. They chanted prayers in the streets, causing great trouble. Such events were harmful to the religion.

Should the Alevites not demand anything from the state?

The state does not oppose cemevis. They perform cem and semah, even on TV. But there are still houses in Turkey which are raided for reading books and for the remembrance of God. There is no record of a house in the last 40-50 years which was raided for performing cem. But for others, the number of cases opened is two thousand. There has never been a case for a cem or semah. Alevites have been treated more tolerantly.