Written by Stanley Ridge, The Fountain. Posted in Book Reviews.

Faith, Theology and Service in Peacebuilding

Fethullah Gülen's work and thinking starts and ends in faith. In a world that commonly extends conflict by speaking of religion either in stereotyped or in ideologized terms, this is a refreshingly engaged perspective.

Faced with the challenge of mounting hostility between the Islamic world and the West, and with belligerent and increasingly fundamentalist groups on both sides supposedly speaking in the name of religion, the need for peacebuilding with integrity is pressing. The writers of different traditions whose essays resonate here explore the faith-based ideas of one of this century's seminal thinkers and tease out their implications and potential for peacebuilding.

Gülen is deeply and unequivocally Islamic. The first three chapters of the book, by the editors and Mohammed Abu-Nimer, introduce his approach to peacebuilding. They analyze his ideas through various modern lenses as within a tradition from Rumi, Al Ghazali, and Said Nursi, while also showing that the specific approaches he takes to peacebuilding arise from a thorough reading of the contemporary globalized world. Because these approaches are predicated on faith, the initiatives are heuristic. The movement into a caring engagement with the world is a movement of faith, marked by openness to discovery and so by an expectation of change. The object is not simply to change others, but to be changed with others, and so to move into and discover more of the just and caring social condition desired by Allah.

Part 2 takes a closer look at Gülen's reading of the globalized world and his deliberate transgression of the kinds of borders which are a product of modernism and fail to meet human realities or to orient us to global perspectives. In a fascinating essay, Klas Grinell brings Gülen's thinking into association with wider, postmodern debates. Borders, he points out, are associated with fixed identities which do not accord with our realities "in the multi-layered present" (68). Accordingly, crossing the border into the territory of the "other" perhaps does not characterize Gülen's aspiration because it seems to accept existing stereotypes and fails to leave room for the large areas of overlapping territory. Grinell changes the metaphor, seeing Gülen rather as on the border in the sense proposed by the Argentinian Mignolo:

Border thinking ... is thinking and knowledge produced from the borders of colonial modernity, knowledge that recognizes the colonizing aspects of what has been seen as true knowledge in mainstream modernity, and uses local resources to confront and alter that knowledge in order to know the particularities of life lived in that setting better. (75)

Irina Vainovski-Mihai pursues some of the implications of dialogue, which requires an open awareness of the other. She concludes that "the dialogical approach may transform the experience of the other into an experience of the self" (96). As Karina Korostelina suggests, though, that self embodies the creative tension in a dual identity, between "one component connected to a religious identity and another component that reflects membership in a secular nation" (104). The borders involved are different and shifting, finding resolution in a much more sophisticated and tolerant sense of the self. That, taken with Gülen's view of globalization outlined by Richard Penaskovic as more than economic and ideological, as referring "to connectivity and interdependence in all areas of life: cultural, ecological, economic, political, religious, social, and technological" (126), makes hostility manifestly problematic and is conducive to peace.

The third part of the book examines Gülen's theology of dialogue in comparative perspective. Turan Kayaoglu's informative essay traces the overlapping theologies of Rabbi Jonathan Sacks, Pope John-Paul II and Fethullah Gülen - theologies which place interfaith dialogue in the context of the core concerns of each faith. The theological leadership of these three major figures "validates, accommodates, and humanizes the 'other' in order to open up religious space for interfaith activities and to establish religious grounds to complement humanity's quest for peace, tolerance, and care for God's creation" (166). Zeki Saritoprak shows the continuity between Gülen and Ibn Khaldun, the fourteenth century Muslim sociologist, who emphasizes asabiyya or a non-racist, non-nationalist "group solidarity" around key transformative values. Forgiveness, love and compassion are values at the heart of all major religions and are essential to our full humanity. However, in the heat of social tension, they tend to provoke persecution which has to be faced with a patience that involves being true to the self one has discovered through faith. Despite the legal and spiritual persecution and exile Gülen has faced, he concludes "We are going to respect our character... As a believer, I promise that I will never shun any person, and I will not persecute those who have transgressed against me" (184). Approaching the topic from another angle, Douglas Pratt examines the historical "baggage" in Muslim-Jewish-Christian relations and some of the ways in which Gülen seeks to surmount it. I would have welcomed more attention to the persistent discursive patterns that mark that history. However, central to the notion of dialogue is acceptance that the supreme greatness of God cannot be captured in words and that truth blossoms and its implications become clear in an ongoing process of awed interpretation. For People of the Book, "The 'book' is ever a text requiring interpretive understanding and application" (203). Felicitously, the final chapter in this section has a strong emphasis on the hermeneutic. David B Capes places the thinking of the American Baptist, A J Conyers in dialogue with Gülen. Conyers critiques "the modern, secular doctrine of tolerance" in attempting to reclaim "the practice of Christian tolerance based upon humility, hospitality and . . . the incarnation" (207). At the same time, he explicitly recognizes the affinities between Christians and those of other faiths, including specifically "the Sufi mystics of Islam," in this practice (not doctrine) of tolerance (209). Capes concludes with the observation that while Gülen is specific about forgiveness, there seems to be no explicit discussion of it in Conyers. Of course, Gülen's "the road to forgiveness passes through the act of forgiving" (221) is strikingly resonant with "forgive us our sins as we forgive those who sin against us" in the Lord's Prayer. Capes concludes that the difference in the contexts in which the two theologians worked accounts for this apparent gap, implicitly emphasizing the need to interpret contextually. 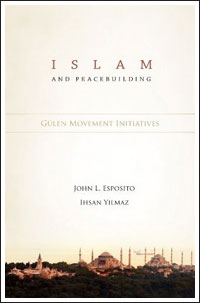 Part four looks at the practice arising from this rich understanding of Islam. The five sets of initiatives discussed are a sample of the hundreds of innovative Gülen Movement ventures undertaken worldwide. All are undertaken by volunteers who seek to serve in lands or regions faced with conflict and very difficult social adjustment. In Gülen's words, "Holy people" carry the "new atmosphere, new understandings and dialogue" around the world, creating "islands of peace for stability and harmony" (181). What is most remarkable to me is the humility and rigor with which the volunteers "read" the local situation to determine how best to engage with it.

Modern Cambodia, recovering from more than two decades of traumatic instability, is a striking example. The situation of the minority Cham Muslim group, impoverished, hostile to public education as assimilatory, with religious education usually separated from life needs, and a high level of illiteracy in Khmer, complicates recovery. Philipp Bruckmayr shows Gülen Movement participants supporting Cambodian NGOs which promote "the acquisition of secular knowledge" within the context of faith, and offer practical support to the Chams (234f). The emphasis on "common values rather than differences" is reflected in translation of seminal works on Islam and in cooperation and dialogue with Buddhists (235). More characteristically Gülenian is the Zaman International School of Phnom Penh, which offers excellent secular schooling within a spiritually sensitive context, and has no assimilationist motives (245).

Jonathan Lacey discusses the Turkish Irish Educational and Cultural Society, a Gülenian group in a country with a tiny, fragmented and fractious Islamic minority. It emphasizes dialogue, supports conferences, and shows hospitality in annual iftar dinners during Ramadan, but most strikingly its members accept full, responsible citizenship: "[T]hey have no intention of assimilating, but instead intend to integrate" (263). It is a vital distinction.

The importance of civil society is emphasized by Mehmet Kalyoncu. He looks at the ways in which Turks, Kurds, Arabs and Assyrian Christians have been mobilized by the Gülen Movement in Mardin "to cooperate in tackling their common problems" (275). The Gülenian school there is also a community focus, and helps build civil society organizations. The focus shifts to initiatives in Kenya and the Philippines, again based on schools which bring together the children of parties in conflict, and provide a platform for addressing local needs.

The role of the Gülen Movement in predominantly Muslim South East Asian societies where there is strong sectarianism and a divisive politicization of religion is explored by Mohamed Nawab bin Mohamed Osman. The fact that the volunteers are driven by a sense of duty to serve in places in great need underlines the appropriateness of the Turkish name of the Movement: hizmet or "service to humanity." The service in Singapore and Indonesia involves dialogue and education with a strong emphasis on honoring and using local customs, as in the Halalbihalal ceremony in Indonesia to bring conflicted groups together in an atmosphere of trust and hospitality.

The final essay by Harun Akyol puts the Movement's credentials to the acid test in the multiple conflict zone of northern Iraq. Fifteen successful schools and a university have been established to provide a base for thinking and interacting differently.

This book, bringing together key papers from three conferences, offers refreshingly varied, critically nuanced views of Gülen's thinking and shows the profound impact hizmet has had on particular individuals and societies.

Stanley Ridge is Emeritus Professor of English and retired Pro-Vice-Chancellor of the University of the Western Cape, South Africa.

Islam and Peacebuilding: Gülen Movement’s InitiativesEdited by John Esposito and Ihsan Yilmaz, this book explores the contributions of the Gülen movement in the area of interfaith dialogue. Contributing scholars take on the examples of interfaith or intercultural dialogue projects of the Gülen movement throughout the world and analyze their potential impact as well as the reasoning and philopshy behind. Overall, the book alters perceptions on the issue of common understanding and dialogue between Islam and the rest of the world.

John Esposito is Al Waleed bin Talal Professor at the Center for Christian-Muslim Understanding, Georgetown University. He has authored numerous books and articles on Islam. Ihsan Yilmaz is an associate professor of political science at Fatih University, Istanbul, Turkey.

Buy This Book at Amazon.com